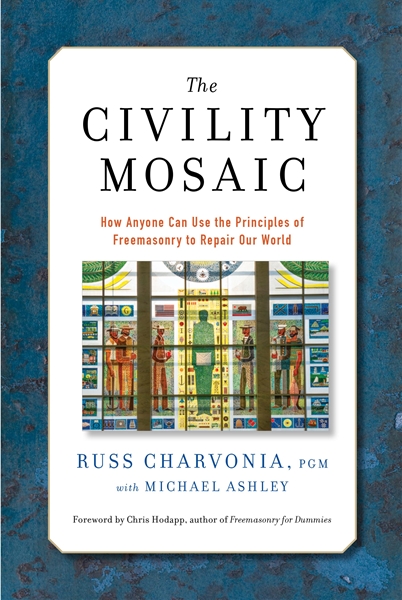 What people are saying about The Civility Mosaic

“ This book is a must read for anyone concerned about the present course of incivility and extreme division in our country.”

—Dr. Bertie Simmons, Retired Educator and author of Whispers of Hope: The Story of My Life

“The Civility Mosaic is one of those rare books that present a defense of civility while providing relevant solutions to combatting incivility for all citizens of the world.”

“By tracing Masonry back to its roots . . . Charvonia uses the notions of debate, deliberation, and dialogue as cornerstones of how to transform our divided society.”

Civility, as we see it, isn’t simply about playing nice. It’s about giving people the resources to have rational and productive discussions about hard subjects. It’s also about finding ways to work more productively with all of our brothers and sisters for the greater good of society.

In these dark and turbulent times of discord, The Civility Mosaic urges us not to abdicate our human duty. It’s our hope that it encourages every reader to be the proverbial stone dropped into the placid waters of complacency, allowing our actions to be ripples of change, spreading to far shores.

Russ Charvonia began his Masonic journey in 1992 when he knocked on the door of what was then San Buenaventura (now Channel Islands) Lodge No. 214 in Ventura, California. He almost immediately became a lodge officer, and served as Master in 1996. He served the Grand Lodge of California in many capacities, including serving as Grand Orator in 2009/10, and ultimately as Grand Master in 2014/15.

Among the myriad of nonprofit organizations, Russ is President of the Alisa Ann Ruch Burn Foundation, serves on the board of the Conflict Resolution Institute of Ventura County, and volunteers for Channel Islands Restoration, helping to restore the Channel Islands to their native condition.

Russ has been a financial advisor for more than four decades, is an estate and charitable planning attorney, and a mediator. He loves helping people achieve their financial dreams and resolve conflict.

He is married to his best friend, Linda, is the father of Keith and Alissa, and grandfather of Tanner and Hudson. He and Linda live in Ventura, California.

Russ says “Next to becoming a husband and a father, nothing has changed my life for the good as much as Freemasonry”.

Michael Ashley is a former Disney screenwriter and the author of more than 25 books on numerous subjects, including four bestsellers. Coming on the heels of coauthoring Own the A.I. Revolution(McGraw Hill) in 2019, Skyhorse Publishing will publish his newest book: The Art of Routine: Discover How Routineology Can Transform Your Life in Q2 of 2021.

A regular contributor to Forbes and Entrepreneur, Michael writes about AI and big data from his vantage point of the United Nations’ AI For Good. Also an ambassador to City.AI, an international organization for the ethical use of tech, he is an in-demand professional speaker who keynotes on average 3-4 times a month at various organizations. (During COVID, these appearances have continued virtually.)

Prior to starting his creative content agency, Michael began his career as a playwright and a newspaper reporter. A former screenwriting professor at Chapman University, he has been featured in KTLA, Entertainment Weekly, The National Examiner, the UN’s ITU News, The Orange County Business Journal, Fox Sports Radio, and The Orange County Register. The co-host of Changing the Story Podcast and UN’s Artistic Intelligence series.

Michael serves as a story consultant for companies on how to best convey their messaging and currently resides in Hayden, Idaho with his wife, two young children and their dog.

Brother Russ, I am in a state of euphoria over the reading of The Civility Mosaic. You have produced a true work of wonder. I am not certain, but “I feel reborn” may be an apt description of my emotions after having finished Chapter 11 and the “Afterword”. Kudos to you Grand Master! Can hardly wait to discuss your brilliant work further with you. Mark F.

Not Just for Masons

While this is a book written by Masons, it is not written for Masons, or rather, not only for Masons. This is a book for everyone/anyone who wants to be part of improving our world. The authors present real-world issues, and offer tools from Masonic practice and lore as a means to dial down the incivility, engage in dialogue, and perhaps move toward resolution of difficult issues.. The authors are clearly passionate about their subject, and their passion is contagious. Clear, as well, is their desire to present their material in an even-handed and positive manner, inviting the reader to consider the possibility that, "We can do this." Well worth the read and the work.

Within my Sacred Lodge