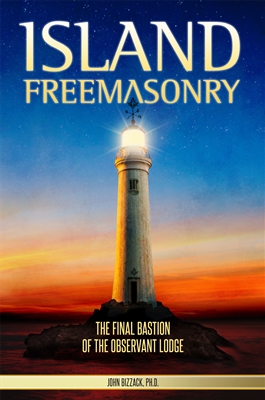 In the United States, the last one hundred years has seen Freemasonry, once a cornerstone of American civil society, subside in influence, popularity and relevance. From an all-time membership high in the 1950s, American membership numbers steadily declined for the last fifty years, resulting in half-empty lodge rooms and shuttered temples across the nation.

From Anderson's Constitutions to the Morgan Affair to the Post-War Boom in membership, John Bizzack's latest book Island Freemasonry: the Final Bastion of the Observant Lodge answers those questions by examining the evolution of American Freemasonry from its arrival in colonial times to the twenty-first century. In this groundbreaking new study, Bizzack traces the roots of Masonry's decline by charting how the U.S. grand lodges lost their way, departing from the original plan of Masonry in a never-ending quest for numbers.

Through meticulous and thoroughly documented scholarship, the author documents the formation and spread of the Order in North America and charts its early successes until the cataclysm: the Morgan Affair, after which everything changed. In the period that follows, nothing escapes Bizzack's gaze as he explores social evolution, grand lodge policies and local lodge practices which contributed to the fraternity's reversals.

But beyond documenting the ills suffered by the American Freemasonry, Bizzack reveals the prescription for its recovery; a return to the core values of the order emphasizing proper instruction, education and preparation for leadership.

Island Freemasonry is a must-read for all students of the Fraternity, and should be required reading for all Masons in leadership positions whether at the local or grand lodge level.

“Bro. Bizzack has coined a new term for those lodges that have been gradually changing toward the more observance practices found in our heritage with Island Freemasonry. He delves into the causes of the current condition of our Craft in America and how we might escape its present state as he provides great historical value to the reader in subjects too rarely discussed. This book stimulated me to re-examine the present as the past, reflecting a transitional change that may be regarded as the history of the future of our fraternity.”

“The insights and research in Island Freemasonry are invaluable and its conclusions inescapable. This book is not an optional purchase and should be required reading for every Freemason.”

“Bizzack takes the reader on a fascinating journey through some of the Craft’s darkest years and offers new insights into the promise of the future of Freemasonry. Troubling though this journey is, the inability—or perhaps unwillingness—of the Craft’s leadership to learn from our past mistakes: that the quest for quantity too often proves to be a narcotic that ultimately weakens ... what was once a formidable educational and philosophical institution.”

“Island Freemasonry exposes the mistakes that were made, and some that continue to be made, in the preservation of the original aim of the Fraternity. American Freemasonry as it is currently, has distilled itself to a state that would not be recognizable if presented to a Mason of even the early twentieth century. Island Freemasonry points out that Freemasonry, practiced as the system it was intended to be, will continue to exist after the current version of what is being passed as Masonry today has long been sunk in the ocean of ordinary.”

Review from the Scottish Rite Journal September/October 2017 Issue: Brother Mike Halleran, PGM KS, is not only one of my favorite Masonic writers (he appears often in the pages of the Journal), he is also the Publications Editor of Macoy Publishing. The letter he sent along with the review copy of the book is given such a good overview that I am cheating and quoting a portion here. In the United States, the last one hundred years has seen Freemasonry, once a cornerstone of American civil society, subside in influence, popularity and relevance. From an all-time membership high in the 1950s, American membership numbers steadily declined for the last fifty years, resulting in half-empty lodge rooms and shuttered temples across the nation. Why? What Changed? From Anderson’s Constitutions to the Morgan Affair, to the PostWar Boom in membership, John Bizzack’s latest book, Island Freemasonry: The Final Bastion of the Observant Lodge answers those questions by examining the evolution of American Freemasonry from its arrival in colonial times to the twenty-first century. In this ground-breaking new study, Bizzack traces the roots of Masonry’s decline by charting how the U.S. grand lodges lost their way, departing from the original plan of Masonry in a neverending quest for numbers. [...] [B]eyond documenting the ills suffered by the American Freemasonry, Bizzack reveals the prescription for its recovery; a return to the core values of the order.... But that being said, there are still some delights to be highlighted. For example, our worthy Brother Bizzack has a wry sense of humor which adds greatly to my enjoyment of the book. Let me provide you with a partial listing of the Table of Contents. CHAPTER 1 Pulling Back the Curtain The Fatal Source of Masonic Ignorance: The Length of Our Cable Tows The Bright Mason CHAPTER 2 Thinking about Freemasonry: An Unnatural Act Understanding Historical Understanding Peering through History with Different Lenses The Slippery Slope of Landmarks The Farther Freemasonry Moves Away From its Heritage, the Less It Resembles Freemasonry James T. Tresner II, 33°, Grand Cross Book Review Editor September/October 2017 THE SCOTTISH RITE JOURNAL 27 The List Makers The Issue of the Perpetuity of American Freemasonry Bending Granite “ ...If You Can Keep It” CHAPTER 3 Transforming Lodge Cultures into Lodge Communities The Genesis of Island Freemasonry Death Throes and the Preservation of Masonic Heritage CHAPTER 4 The First Rapid Expansion: The Dilution of American Freemasonry Frontier Freemasonry—A Kentucky Case Study The First Principle Officers of the Furthermost Western Lodge in America The Political Intrigue behind the First Chartered Lodge in Kentucky CHAPTER 5 The Rapid Halt to Expansion: The Dark Age of American Freemasonry The Roots of Anti-Masonry: Thinking in Time The Ravage of American Freemasonry: The Morgan Affair Backstory: Overlooked Details Surrounding the Rage against Morgan The Other Masonic Outrage Overshadowed by the Morgan Affair The Squandered Opportunity Anti-Masonry Was Never as Dead as Morgan You have to admit that Brother Bizzack knows how to tease. But there is substance in the teasing. Take, for example, Chapter 17—Men Without Chests. This is Bizzack at his most scathing. He borrows a line from C. S. Lewis—Lewis is writing about the breakdown of civilization and the lack of leadership—and writes: “We make men without chests, and expect of them virtue and enterprise—we castrate and then bid the gelding be fruitful.” His point is that we do almost nothing at all at the local Lodge or Grand Lodge level to develop leadership skills among Masons. We sort of hope it will happen by divine lottery. He points out that we do not even remove bad leaders and replace them with others—we just hope they will not do too much damage. We advance them, year after year, even if they have proven their utter incompetence. This is a powerful book, albeit not a comforting one. But it gives one hope—not hope that things will be all right, but hope that it is not yet too late to make things right. We are probably going to have to slap ourselves around a little, but I would rather be slapped than be left to die alone.

we met at the Grand Lodge We had a brief conversation about Josephus and Our local reading club that was reading M.P. Hall Secret Teachings. You insisted that I purchase Island Freemasonry, which I did. A fascinating read, much of which I was cognizant of but there were aspects that I had not considered previously. Overall, the book is dead on so to speak. The issues that plague the craft are deeply rooted. In the past forty years I have witnessed the topics within the book unfold within our lodge system. Within our District we had two prevailing approaches to the issue. One our study group that functions as brothers with a certain level of secrecy which we aspire to guard among us. We feel free to discuss any topic within the group but not outside of it. An Island by definition I suppose. The other approach is a lodge that is doing well in recruiting quality members to its core group. I wish to thank you for recommending this book

The Search for Leadership by Allen Roberts