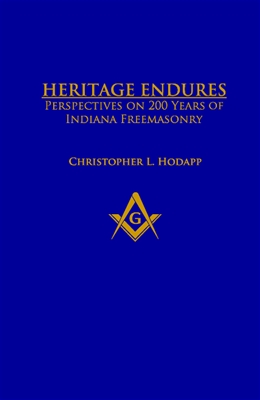 Freemasonry crossed the frontier into the Indiana Territory officially in 1809 when the Grand Lodge of Kentucky organized Vincennes Lodge No. 15 in that growing town along the banks of the Wabash River. It would take nine more years and the declaration of Indiana statehood before the formation of the Grand Lodge of Indiana F&AM on January 13, 1818 in Madison. Since that time, Indiana's Freemasons have been at the center of their communities, their state, and the nation.

Indiana has previously published two major works by Masonic historians about their first 150 years, but Heritage Endures by Christopher Hodapp (Freemasons For Dummies) is a different type of grand lodge history book. It places the state's fraternity within the wider picture of American society and the rest of the Masonic world for the last two centuries. There is certainly a concentration on the last fifty years of changes and developments, but there are also major chapters on aspects not covered by prior authors in Indiana.

The Magus Of Freemasonry

From Roanoke to Raleigh: Freemasonry in North Carolina, 1730-1800

Symbols in the Wilderness