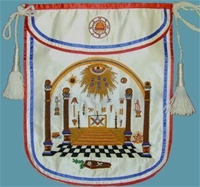 When the young Marquis de Lafayette came to America at the age of 20 and joined George Washington's army for the Battle of Brandywine in 1777, the American cause had become his cause.  The affection each man held for the other is legend.  So too is the legacy of Masonic history developed through that affection.

The Lafayette Apron of white satin and embroidered by Madame Lafayette, was presented to Bro.Washington by Bro. Lafayette in August of 1784.  The apron was presented to the Grand Lodge of Pennsylvania by the Washington Benevolent Society on July 3, 1829, and is now on display in the Grand Lodge Museum at the Masonic Temple in Philadelphia.  The body and flap are rounded, and has vibrant colors in the Symbols and border.  Everything on this apron is Symbolic.  Bro. Frank W. Bobb, Grand Lodge Librarian and curator, has used the meanings most widely accepted by Masonic Scholars in interpreting all of the symbolism depicted on the George Washington Apron. For example, the border colors on the apron of Red, White, and Blue, are the National colors of the United States and France. This helps to represent the friendship between Washington and Layfayette.

It is a study in symbolism.  For example, the apron border colors of red, white, and blue are the national colors both of the United States and France.   Symbols are silent emblems having meaning only when interpreted.  Given the unique character of the interpretation process, it can be understood that no symbol has absolute meaning.  In preparing the following, Bro. Frank W. Bobb, Grand Lodge Librarian and Curator, has used those meanings most widely accepted by Masonic scholars to interpret the symbolism of the Washington Apron.

Just Perfect. A must have.