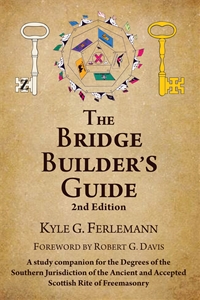 It's always exciting when a good friend writes a good book, and that is the case here. Brother Ferlemann, a very active Kansas Scottish Rite Mason, has brought his sense of organization to the teaching of new Scottish Rite Masons and produced a very helpful guide-not only for those who teach but for those who learn. In a categorization which had never occurred to me, but which makes a great deal of sense, he divides Freemasonry into three general areas: Ceremonial Arts, Tenets of Freedom, and Esoteric Studies.

Under “Tenets of Freedom” he covers three aspects of Liberty: the promotion of personal development in order to become a productive citizen; the tenets of a free society so we can understand and articulate the benefits of freedom; and the political methods used to sustain a government of the people, by the people, and for the people. You can note one of the organizational principles in action here—not only the virtue but the practical application of the virtue.

Kyle is one of the best bringers of Ordo ab Chao I’ve ever known. Throughout the book, his discussions are filled with uncommon common sense. It is a valuable resource for those who teach and for those who seek to learn. I really recommend this book!

Very concise and pertinent to the study of the Craft and building character through knowledge and information. I will read it again.

This review is from: Bridge Builder's Guide (Paperback)

This book provided an insight into the various symbols, people and other information obtained from the degrees described here within.

I have been dealing with Macoy this is where I send all of our next made M.M

Guide to the Royal Arch Chapter

The Lodge and the Craft.